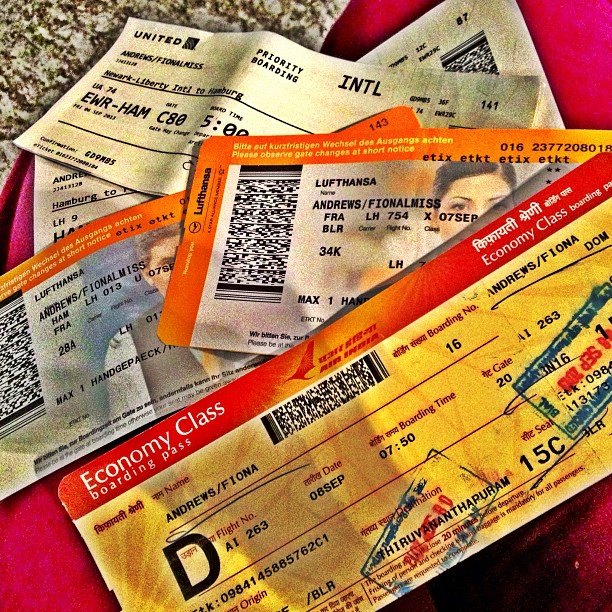 I travel a lot, and I travel cheap. This often means crazy inconveniences, like 15 hour overnight layovers in Portugal or crazy long journeys to get halfway around the world. I have certainly learned a thing or two about staying sane on the cheap while spending ridiculously long times in transit. Here’s what gets me through.

A jacket with tons of pockets (I have a TEC jacket by SeV)- I compulsively check my handbag for all my belongings, so having specific pockets for everything I need enables this obsessive-compulsive (yet prudent) tendency. Also, this made it easy to go through the five security checkpoints en route – just stick it in a bin to go through the x ray, and eliminate the need to dig everything out of jeans pockets. Plus, you’ll be difficult to pickpocket!

A moisture-wicking shirt – you probably won’t actually break a sweat unless you’re running to catch flights, but if you’re going to be wearing the same thing for more than 18 hours you should make it something that won’t hold sweat and odours. I have one from Athleta and one from UnderArmor – both are great! 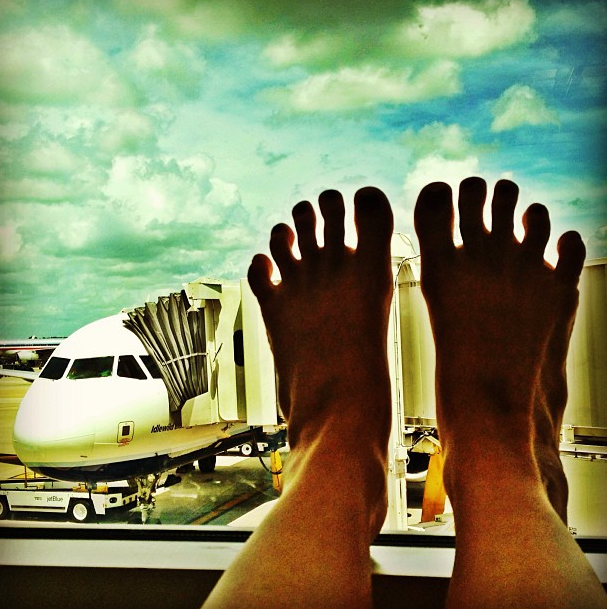 Bare feet- Or sandals. Some people like to wear trainers when travelling- but could you imagine wearing the same socks and shoes for a day and a half?! Not only would you smell horrific and probably develop some sort of fungus, but I know I would get incredibly claustrophobic. Airports are one place I have never been bothered while barefoot, but if that skeeves you out then shoes you can easily kick off are a good option. It’s amazing what wiggling your toes around can do for your sanity.

Noise-reducing earbuds- full-size over-ear studio headphones are awesome, but so bulky to travel with. They can also be a dead giveaway that you have cash to spare- and while this may not be an issue on a plane, it could make you a target while you’re waiting around stations or riding local transportation. Also, you do want to have some idea what’s going on around you even while trying to eliminate sounds of the screaming child in seat 36A or construction in Bangalore at 3 AM.

Timekeeping – it’s easy to get stuck in a space/time vacuum when you’re travelling to a time zone 10.5 hours ahead of yours and taking over a day to get there. In my case, I left at 17.45 EST on Friday and arrived in Kerala around 12.00 IST on Sunday. Could you imagine losing nearly two days like that? No, because you would lose your marbles. Take it one layover at a time, and always do what is appropriate for whatever time zone you are arriving in. Don’t watch movies all night on the transatlantic redeye, and don’t crash in the airport lounge if your layover is during the day. Yes, it sucks, but this is the best way to avoid jet lag. Don’t try to think about what time it is at home- look only at local clocks and act accordingly.

Food- While it’s important to calibrate your sleep schedule, anything goes when you’re hungry. Don’t try to follow normal mealtimes- if you’re hungry, just eat. The extra calories help compensate for the poor quality of the sleep you are likely to get. Look, you can’t do much about the lack of sleep, showers, privacy, or noise- but you can usually find something to snack on. Trust me, by hour 30 without a shower or breath of fresh air, you’ve earned as many samosas as you damn well please.

Healthy snacks – like I said, eat whenever you want. But try to make healthy choices when you can- greasy fast food is okay when you’ve had a rough flight or are waiting at a dead airport at 4.30 in the morning wondering what special kind of hell you’ve discovered, but you will feel healthier, less bloated, and more energetic if you eat healthy foods when you can. Bring something light for snacking and something protein-dense for when you’re actually hungry; also bring one thing that is sweet and one savoury to catch either craving. I powered through most of a packet of lime-chili mixed nuts, half a bag of multiseed rice crackers, and a few handfuls of omega trek mix (all Trader Joe’s). Airplane food is much better than it used to be, but I learned the hard way never to rely on it to be edible (especially if you ordered a special meal that may never arrive) or filling.

Caffeine- in moderation! Avoid it near the beginning of your journey- it’s better to be a bit dozy on a flight than alert and hyper. But on the last legs (when you’re more likely to have to spend a night in an airport), it’s okay to have a cup of coffee in the morning or afternoon. If you know you’re only a few hours from your destination where you can finally relax, a cup of coffee can lift your spirits and give you the last bit of energy you need. It can also help your digestion, which is probably in a sorry state from aeroplane bloat, crappy food, and an irregular schedule. BUT- don’t go for sugary soda! You will crash and be miserable, not to mention miss out on the health benefits of naturally occurring caffeine. Pick something natural- lightly sweetened coffee or tea with ginseng.

Basic care products – I always bring a nice moisturiser (plane air is rough on the skin!), lip balm, a small face wash, and toothbrush & toothpaste in my carryon. Never underestimate the power of clean skin and minty-fresh breath to improve your mood! Wearing a ton of makeup for long flights is impractical, but it can also be nice to have some mascara or something to remind yourself that you are still a person and not a grungy, exhausted herd animal moving through queue after queue.

Empathy – it is so easy to get ticked at the family with noisy kids, or be snippy with the flight attendant who tells you there is no vegetarian meal for you on an 9 hour flight. But put yourself in someone else’s shoes- those parents have to deal with everyone’s death glares, and they probably have a reason for dragging their kids on a long flight. That flight attendant isn’t the one who organised the meals on the plane- but she is responsible for being pleasant and giving meals to dozens of passengers who probably aren’t making her job any easier. Just remember that one day you may be dragging your own kids on a flight in poor circumstances, make a note to send a strongly worded email to the United customer service team, kick off your shoes, pop on your headphones, and fill up on some awesome snacks to hold you over until the next airport. 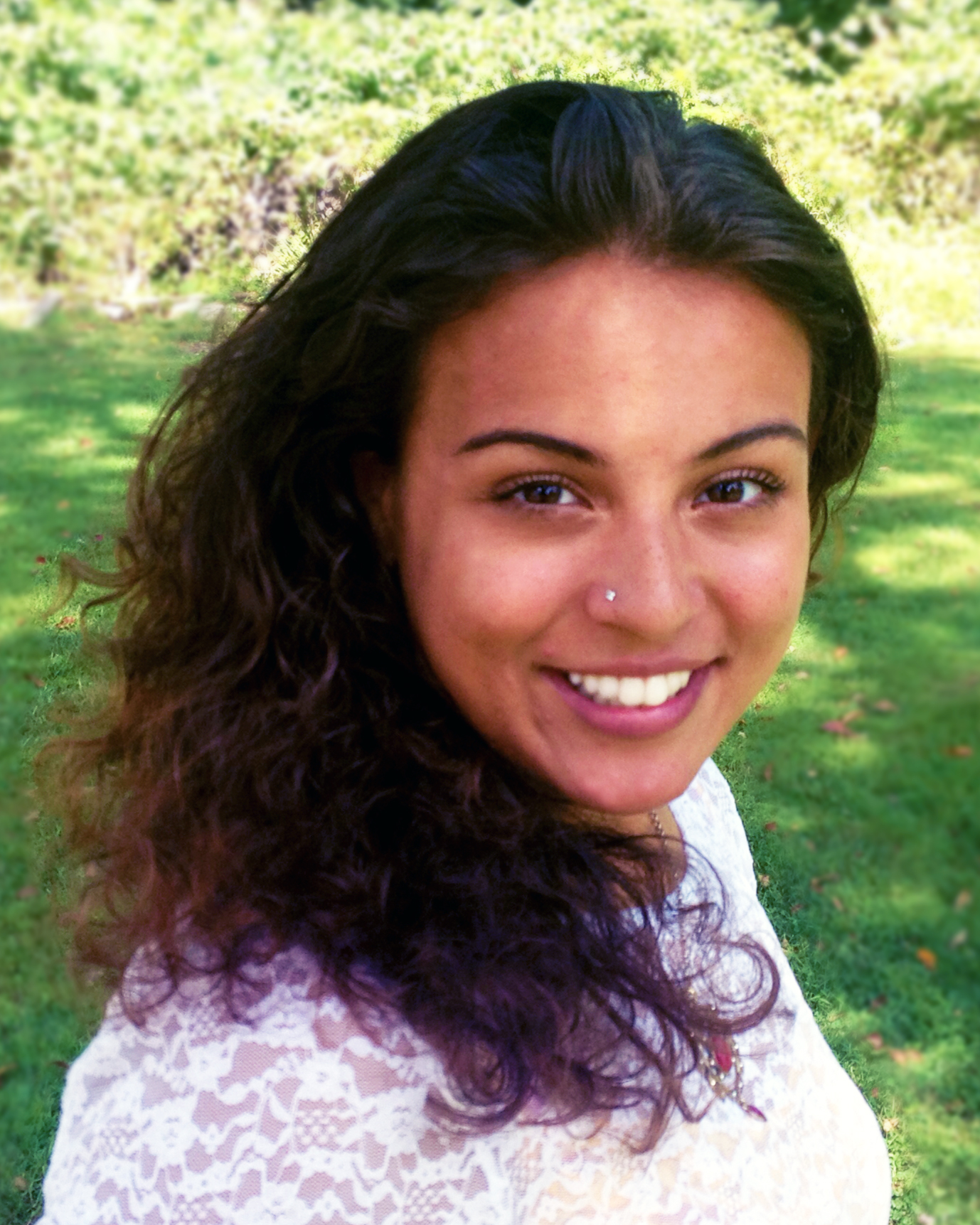